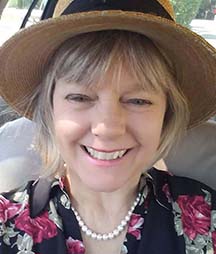 PAST: I’ve been interested in creating art, which is surely a subjective version of the world as
I see it, since a child and have studied it my entire life in various forms.
I received through study of the history, traditions, and principles of the classical fine arts a
solid basic training from Paier College of Art in Connecticut during the early 1970s while
majoring in illustration. The world of art I was exposed to in school was hugely competitive,
and I faltered with my sense of self, place, and security.
In conjunction with leaving the east coast, settling in California, marriage, and motherhood,
I continued to express my creative urges by finding support in Chinese brush painting and
textile design, applying it to home textiles and clothing. Art as a therapeutic tool for creativity,
discovery and healing came later, as I earned an MA in Art Therapy in 1994. Following an
intense career working as Art Therapist and instructor/teacher for 15 years at several
institutions, I retired at age 59.

PRESENT: I am a colorist and a teaching artist. I live in and love to create art, and I do this in many media. I like a challenge. My gift is a sensitivity to the use of color, form, tone and texture in my work. I am delighted when a viewer interprets my work through his/her own mood, or find that it mirrors a hidden emotion. My color styles and combinations focus on enhancing reality—making it even more dynamic and exciting—reminding us of the powerful energy forces that dance behind all objects in nature. For me, one pivotal goal of art making is “to uplift and transform the human spirit.” Artists that have influenced my work include Anne Leveque, Chagall, Monet, Wolf Kahn, Keck, O’Keeffe. These influences merge with my personality and result in a new artistic paradigm. Media include gouache and watercolor, oil, pastel, acrylic, dyes on silk, and mixed media.
In 2010, I joined the Art Association Napa Valley community, became a board member, served as President for 6 years; now I sit as VP.

WORK: The work you see here represents my venture into the world of abstract painting, a step
sideways from the style of representational/realistic art in which I have been schooled/steeped. I
quickly recognized that utilizing the same solid concepts I had been taught — line, form,
color, shape, value, texture, and space — was the key to a balanced, pleasing successful work
of abstraction.